No idea where to begin

I doubt that anyone will ever be reading this, but I may start posting here again.  In the years since I stopped posting my life has changed dramatically, my marriage has been tested, I moved again, got a 'real' job, lost a baby, I could keep this list going on forever......

If anyone sees this, I hope and pray that you are doing well.
Posted by Tina - Our Rustic Roots at 7:37 PM 5 comments:

I'm not a give out personal details kind of person, but I'll say that someone who was supposed to be very good friends (along with their spouse) of DH and mine did something really harmful and hurtful.  They betrayed our friendship and abused a position they were in for their own gain.

She's being held responsible for it, but that's little consolation when you're the one stuck with the mess.

On top of that I have a relative in the hospital for going on the third week after a horrific car accident where she had to have a truck winched off her vehicle so they could cut her out of it and life flight her.  Things are going better now, thank you God, but for quite some time it wasn't certain if she'd survive it.  She broke, well, most of herself, I guess, is the best way to say it.

A man who was a second father to me just passed away in a freak accident this last week, too.

It's very hard to be so far from home right now.

It's been a MESS around here, I tell you!

New tool for me

OK, not new, but new to me.  It's actually old, which makes it that much better as far as I'm concerned.

I bought it yesterday at an antique store that was having a sale.  I paid $15 for it.  Now I can't wait to get some cabbage! 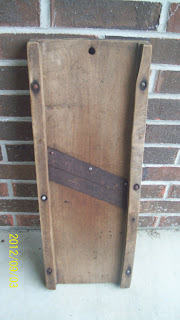 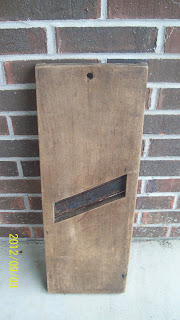 Life fell apart in a big way.  I'm not able to be here posting or reading lately.  I'm sorry.  I'll be back eventually.

First canning of the year

The nectarines on the tree in the back yard ripened the other day.  When they get ripe, they ALL get ripe.  They don't last long, either, so you have to watch them, collect them and use them or put them up quickly or else you are left with nothing but a bunch of mushy rotten fruit.

This is one of the trees I pruned this year.  It REALLY made a difference.  I bet last year we got maybe 40-50 nectarines total.  We ate some of them and I had enough to make a cobbler.

This year was different.

This year I had two big red bowls full. 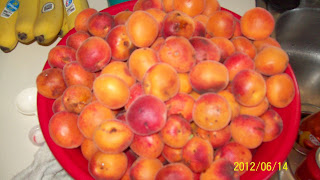 PLUS this big metal bowl full.  This bowl is quite a bit larger than my wok, to give you an idea of the size. 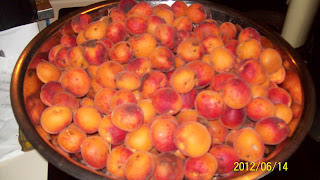 I treated them like peaches and cooked them down for jam. 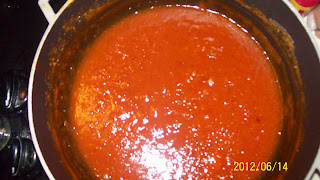 Another friend with chickens update

They have a coon infestation out there!

As of this morning they have caught SEVEN.  They caught two in the same trap last night, which we all found a bit odd and amusing.

Two days ago I heard of a young man with some pullets who was downsizing due to his step-mother's ill health.  I went out there and came back with two silver laced wyandotes and three black sex links.

We took them to our friends in a pet carrier and told them we'd caught a coon, too, so we brought it to them.  They thought we'd lost our minds!

Then we told the kids to look carefully in the carrier and they were SO excited!  I'll have to get pictures of the chickens the next time we go over there.

It worked out well, we were able to help our friends replace some of their lost birds as well as assure that young man that his pullets were going to a home with three kids to spoil them rotten and love on them.  :)
Posted by Tina - Our Rustic Roots at 9:33 AM 3 comments:

Second update on friends with chickens

So far they have caught three raccoons.  They have not caught the opossum yet.

She showed me one of the cam pics from last night.

You could clearly see the raccoon that was in the box trap.

Along with FOUR MORE standing around staring at it!
Posted by Tina - Our Rustic Roots at 6:40 PM 3 comments: